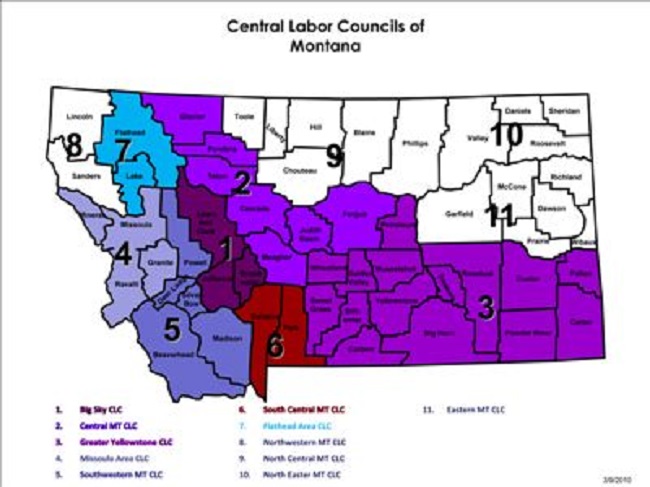 The Big Sky Central Labor Council posted a picture on its Facebook page on Friday comparing Wisconsin Republican Gov. Scott Walker to Adolf Hitler for his well-known efforts in Wisconsin to weaken the power of public-sector unions.

As the eyes of many labor groups and the national media are on the state of Wisconsin as its legislature appears to be on the verge of passing Right-to-Work legislation, the AFL-CIO affiliated group shared a picture on its Facebook page from another social media group, inronically, called “Union Thugs.” The picture shows Adolf Hitler on the left and Scott Walker on the right with a quote about unions that has been attributed to arguably the most infamous tyrant in history. 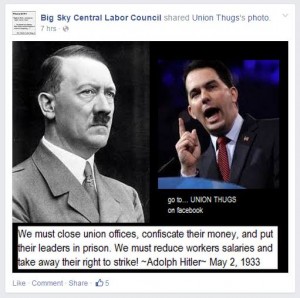 “We must close union offices, confiscate their money, and put their leaders in prison. We must reduce worker’s salaries and take away their right to strike!” states the quote.

The quote in the picture actually misspells “Adolf,” using a “ph” instead of the “f” on the end of the name. The authenticity of the quote has also been called into question many times, with little evidence from primary sources that Hitler actually made the statement

While Walker’s actions — pushing a law in 2011 that removed the rights of most public-sector unions to collectively bargain and currently supporting a right-to-work law — take none of the actions described in the supposed Hitler quote, it has not stopped many different groups and activists in the Big Labor movement from using it to make comparisons between Hitler and Walker.

A 2011 piece on the far-left website Daily Kos tried to defend the quote and the comparison, stating that, while the quote itself was not real, the date from the quote (May 2, 1933) was the day that the Nazi Party moved to end trade unions and subjugate them to the broader National Socialist movement.

The Daily Kos piece does not explain how a law that simply restricts the collective bargaining power of public sector unions is the same as Nazi efforts in the 1930’s to subjugate every aspect of German life.

The BSCLC is one of the Montana AFL-CIO’s central labor council’s as an affiliate of labor unions in Broadwater, Jefferson, and Lewis and Clark Counties.

Gov. Walker successfully took on Wisconsin’s powerful public sector unions in 2011, when the Wisconsin legislature passed a law that limits most public workers to only bargaining over wage increases no greater than inflation. The efforts spawned massive protests, federal court cases, and a recall election that Walker survived.

The battle between unions and Walker re-heated last week as the Wisconsin legislature took up “Right-to-Work” legislation. Right-to-Work legislation prohibits labor contracts that require workers to join a union and pay forced dues as a condition of employment.

While Big Labor rhetoric has heated up in the press and on social media, coverage from Media Trackers Wisconsin has shown that the pro-union protests at the state capitol have been nowhere near as large or as passionate as in 2011.

The Wisconsin State Senate passed the legislation by a 17-15 on Thursday and the measure now is in the State Assembly.