Judicial Watch announced today that it has obtained documents from the Internal Revenue Service (IRS) that confirm that the IRS used donor lists to tax-exempt organizations to target those donors for audits.  The documents also show IRS officials specifically highlighted how the U.S. Chamber of Commerce may come under “high scrutiny” from the IRS.  The IRS produced the records in a Freedom of Information lawsuit seeking documents about selection of individuals for audit-based application information on donor lists submitted by Tea Party and other 501(c)(4) tax-exempt organizations (Judicial Watch v. Internal Revenue Service (No. 1:15-cv-00220)).

In 2010, after receiving Baucus’s letter, the IRS considered the issue of auditing donors to 501(c)(4) organizations, alleging that a 35 percent gift tax would be due on donations in excess of $13,000.  The documents show that the IRS wanted to cross-check donor lists from 501(c)(4) organizations against gift tax filings and commence audits against taxpayers based on this information. 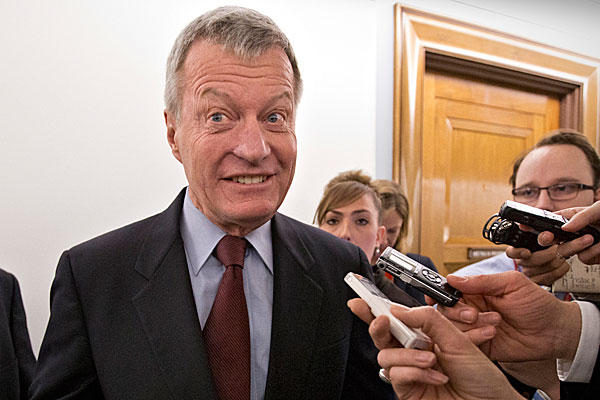 Letters dating back to 2010 show that then Senate Finance Committee chair Baucus sent a letter to then IRS chairman Douglas Shulman urging him to “survey major 501(c)(4), (c)(5) and (c)(6) organizations … to examine whether or not they are operated for the organization’s intended tax exempt purpose.”

After the rise of the Tea Party and other conservative groups in opposition to President Obama’s Affordable Care Act (Obamacare) legislation in 2010, many groups and their donors were targeted for audits and had their non-profit applications stalled or denied for years when Democrats like Baucus argued they were engaged in political activity prohibited by tax-exemption rules.  Democrats allege conservative groups formed the non-profits to surreptitiously engage in  political activity, while Republicans say the groups operated within IRS guidelines and similarly politically engaged left-wing groups faced lesser scrutiny and faster approval of their non-profit applications.

“In 2010, after receiving Baucus’s letter, the IRS considered the issue of auditing donors to 501(c)(4) organizations, alleging that a 35 percent gift tax would be due on donations in excess of $13,000.  The documents show that the IRS wanted to cross-check donor lists from 501(c)(4) organizations against gift tax filings and commence audits against taxpayers based on this information,” states Judicial Watch.

Judicial Watch shows that 5 donors of an unnamed organization were audited. The 501(c)4 group Crossroads GPS, associated with Republican elections guru Karl Rove, “was specifically named in the context of applying the gift tax.”

Baucus further stated in the letter to Commissioner Shulman that he planned “to ask the [Finance] Committee to open its own investigation and/or take appropriate legislative action,” based upon Shulman’s report back to Baucus.  Baucus’ chairmanship of the powerful Senate Finance Committee gave him wide power to investigate or act on any improprieties if they were found.

Some conservative groups also believe that additional direction for scrutiny of conservative non-profits came from the White House, based upon Shulman visiting Pennsylvania Avenue over 100 times during his tenure as the agency head.  Shulman replied to Baucus’ letter in February 2011, stating they would increase focus on scrutinizing non-profits engaged in political activity.

IRS and Obama Administration officials have maintained that the targeting of conservative and Tea Party groups was the result of mismanagement by lower level employees in the agency’s Cincinnati office. The IRS inspector general blamed ineffective management of top bureaucrats.

The letter is just one in a long list of developments as major conservative groups and legislators have sued the IRS for access related to records of the targeting and subpoeaned officials to House investigations over the targeting.

In a February 2014 meeting of the U.S. House Ways and Means Committee, then Chairman Dave Camp (R-MI) summed up the alleged targeting of conservative groups.

Various officials have alternately claimed that hard drives containing emails for officials such as former IRS Commissioner Lois Lerner were lost, and then recovered.  Various lawsuits and investigations over the widespread matter are ongoing.

Long-serving Senator Baucus declined to run for re-election in 2014 and was named Ambassador to China while Democratic Governor Bullock appointed his Lieutenant Governor to Baucus’ seat.  Appointed Senator John Walsh later quit his own Senate campaign in disgrace when it was discovered by the New York Times that Walsh had plagiarized large portions of his master’s thesis at the Army War College.

Honestly, nothing the Dems do surprises me anymore. If it’s crooked, they’re into it. If it goes against morals and the will of the American people, a Dem is usually behind it. Can we say gun control, high taxes, poor economy, the doubling of the national debt over the past six years, over crowded welfare plantations, corrupt Justice Dept, EPA, and IRS, gutting of the military, non-control of our borders, etc…makes one seriously wonder why they never make a mistake that turns out good for the country.