For Ron Catlett’s interview with Will Deschamps, click here. 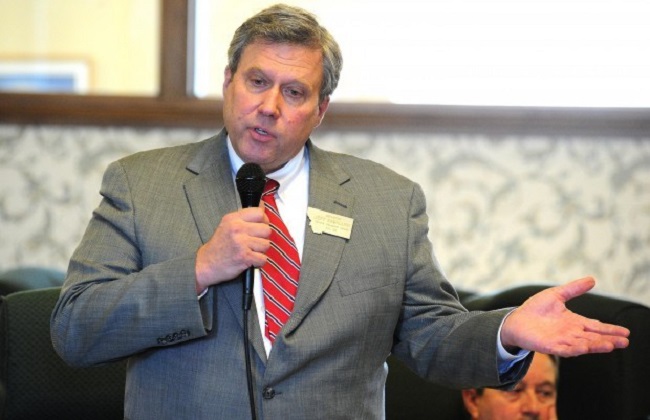 When the 2015 Montana Republican Party Convention convenes on June 26th in Helena, delegates will be tasked with electing a chair who will be faced with the difficult job of uniting a party currently mired in factionalism and building a base from which the party can win races — particularly statewide races — in 2016.

There are three candidates vying for the position in 2015, including the incumbent chair, Will Deschamps of Missoula. The two challengers are Dan Happel of Madison County, and State Rep. and former State Senate President Jeff Essmann of Billings.

Media Trackers conducted interviews with all three candidates. Our third and final interview is with State Rep. Jeff Essmann.

Essmann is a real estate developer who has been active in Republican politics in Yellowstone County for more than three decades. In the last three legislative sessions — two as a State Senator and one as a State Rep. — Essmann has maintained a high profile, carrying legislation in 2011 that altered and significantly restricted Montana’s medical marijuana law. In 2013, he was part of a controversial effort by more conservative Republicans to oust more moderate Republicans from leadership after moderates buckled under pressure to Democratic Gov. Brian Schweitzer during the 2011 session.

We provided each candidate with the same ten questions and allowed each to write out their answers. The answers provided come straight from the candidates themselves. We have not altered the answers in anyway.

1. Why are you seeking the position of Montana GOP Chair? What would be your goals for the next term if you became head of the party?

I’m running for MTGOP Chairman to do two things: get more Republicans elected and give our candidates and local parties the support they need to succeed. I have a straightforward plan: Recruit, Respond, Raise, and Reorganize. That means recruiting strong candidates with the help of the grassroots of our party. Responding to and communicating with our party’s stakeholders that embrace our party’s ideas and views. Raising the necessary funds so that our committees, candidates, and campaigns have the resources needed for success. Reorganizing our party for better-run modern campaigns and building a winning plan to execute. If we do these things, I think we can grow our party, make it stronger for the future, and see electoral success up-and-down the ballot in 2016.

2. Can you provide a brief biography of your background and work in politics?

I’ve spent 35 plus years in Republican politics including serving as chairman of the Yellowstone County Committee from 1995 to 1999. In 2009 to 2010, I served as Chairman of the Montana Republican Legislative Campaign Committee and led that group in recruiting, training and assisting Republican candidates to achieve 68 wins in the Montana House and grow our numbers in the Senate to 28, a high water mark in recent times. I believe that I have the experience and background necessary to build a strong and effective organization at the Montana Republican Party.

3. The Montana Republican Party has seen great electoral success in the last two mid-term elections (2010 and 2014), yet had a difficult time winning statewide offices in 2012. How can the party be successful in presidential election years that are typically more favorable to Democrats?

The 2014 elections resulted in Republican electoral success across Montana and I am confident we can use that momentum to elect more Republicans in 2016. I intend to solicit advice from around the state, build a plan, and execute on that plan to win elections. Setting measureable goals and benchmarks is critical to holding our organization accountable. We have local parties and organizations across Montana, and I intend to help them actively organize and give them the tools and resources they need to succeed.

4. What is your strategy for building a ground game (i.e. raising money, hiring staff, managing volunteers, knocking on doors, etc.) that can win elections?

I have a straightforward plan: Recruit, Respond, Raise, and Reorganize.

My first act as Chairman will be to begin to convene an advisory team to look at our strengths and weaknesses as an organization. We will solicit advice from across our party, in every corner of the state, on what we can and should be doing in order to build a plan and set goals and benchmarks to achieve success in 2016 and beyond. In addition to the advisory committee I will also convene a team of young and ambitious leaders to help address newly emerging issues in our country and world; building a party for tomorrow is key to success today.

5. Rumors of financial troubles continue to follow the Montana Republican Party. How will you as chair, get the party on solid financial ground?

Donors to our organization need to have confidence in their investment, and that means having a credible leader with a solid track record and a plan to strengthen our party. Fundraising is a big part of this job in order to have the resources we need to be able to compete with the deep-pocketed out of state special-interests that have a different vision for our state and country. Raising the necessary funds is critical so that our party, organizations, candidates, and campaigns have the resources needed for success. But, it’s not just all about raising money – it’s about building a plan to raise the resources, setting goals, accountability, budgeting and spending right.

As Chairman, I will: build a finance plan, execute on that plan, set goals, benchmarks, give the MTGOP Committees regular updates on our progress so they can see where and how the party’s resources are being used, and I intend to be held accountable for results. I plan to recruit a finance team that will be tasked with helping raise money for the party so that we can build an organization that is well funded, prepared, and ready to win.

6. What are the most important issues facing the state of Montana and the nation?

The state and the country are facing a choice: whether the best days of this country are behind us, which is the pessimistic view of the Democratic Party that has regulated the people and small businesses of this nation into slow growth, lower wages and reduced opportunity, or whether the best days are still ahead if the ambition, drive and energy of the American people are unleashed to provide a more dynamic economy and better jobs under the Republican philosophy of smaller government and lower taxes. How to get a better life at home, and a better future for our kids and grandkids is the number one issue.

7. Differences between the party’s “conservative” wing and the so-called “responsible” Republicans persist and have undermined GOP legislative efforts, particularly in the last two sessions. How will you as chairman work to unite these factions? What is your plan to grow the party in coming years?

Our party’s strength lies in individuals with diverse viewpoints. Robust discussions are healthy for the strength of our party as long as the discussions focus on policy and not personalities. I see those active in the MTGOP as shareholders in this organization with rights and opinions that will be respected – as Chairman, my door will be open to all, I will return phone calls and emails. I will be actively asking for feedback, thoughts, and ideas. I will do this through personal communications and personal meetings, in addition to a series of statewide conference calls and meetings with grassroots Republican leaders. While listening and responding is important, so is providing our members with information. I intend to provide Montana Republicans with regular updates on our activities, programs, and progress at the MTGOP so that our members know where and how they can best participate to help us achieve positive results. We are a team and it’s critical the next MTGOP Chairman realizes that in order to bring our party together.

8. How much emphasis should the Republican Party continue to put on social issues such as abortion and gay marriage? Should the party move its central focus more towards economic issues?

The Montana Republican Party is pro-life and pro-family and I believe it always will be. The focus of the Republican Party is its core message that smaller government and lower taxes are the best way to protect freedom and offer the opportunity for prosperity. The opposing party continues in its efforts to distract attention from its inherently pessimistic view of the economic future of this country by raising the specter of social issues since it has nothing to offer on improving the lives of Americans.

9. Do you support current efforts to institute closed primaries in Montana? Why, or why not?

I am proud to identify myself as a Republican as I believe and proclaim our core message. Philosophically I do not see why those who do not wish to publicly identify with the party should have a role in choosing the nominee of the party. I believe that in a primary, Democrats should select their Democrat nominee, Libertarians should select their Libertarian nominee, and Republicans should elect the Republican nominee.

10. Given that Democrats often win majorities of younger voters, how does the Montana Republican Party increase the involvement of young people? Also, why has the Democratic Party had more success in recent years attracting female activists and candidates?

I expect that Republicans will win majorities of young voters as we respond to the issues of freedom, privacy and prosperity that are important to their future. As Chairman, I will establish a Youth Leadership Committee of young Montana Republicans to lead the effort to engage their peers in the efforts of our party. I know from serving with them that we have outstanding young legislators and activists. Their efforts to address the concerns of privacy and freedom in our digital age need to be highlighted so that we demonstrate that our policies will create a better future for our children and grandchildren.

In 2015, the Montana Senate elected the first female Senate President – a Republican. In 2014, the Republican primaries for both the U.S. Senate seat and the U.S. House seat attracted female candidates. The number of Republican women legislators continues to grow. I have and will continue to recruit talented and hard-working women to run for local and statewide office in Montana.

Read our interview with incumbent chair and candidate Will Deschamps.