President George W. Bush and his wife Laura- cropped out of the Selma photo by The New York Times?  That story tops this week’s Political Trough.  Plus, editorial boards across the country lambast Hillary Clinton.  And, just where are those e-mails that she sent on that fateful day in Beghazi? The NRA’s LaPierre says the next 700 days are the most dangerous for the Second Amendment.  Zinke raises concern over the threat of Iran with Breitbart News.  And, longtime Clinton confidant James Carville spoke to Montana Democrats in Helena about yoga pants…I know- and you thought he was going to talk about the blue dress (no, not that blue dress- this one)!

Those stories and much more are below.

Washington Examiner- LaPierre: ‘Next 700 days are the most dangerous’ for 2nd Amendment

The National Rifle Association is warning that the administration’s plan to ban one type of AR-15 ammo is just the first step in taking away all hunting rounds, a backdoor bid to impose national gun control.

Rifle ammo has been exempted from the ban because it isn’t typically used in crime. Police agree and say the ban isn’t needed.

The much-maligned Bureau of Alcohol, Tobacco, Firearms and Explosives (ATF) is again coming under fire from Republicans and gun rights groups, who are pushing to rein in the agency’s power — or abolishing it altogether.

The recent attacks follow the ATF’s proposal to prohibit a popular type of armor-piercing ammunition that critics say is a backhanded attempt to render useless AR-15 semi-automatic rifles.

EPA Chief Administrator Gina McCarthy claims she is “busier than [she’s] ever been” as the agency rushes to finish major carbon dioxide regulations on power plants before President Obama leaves office.

“One of the main focuses of the White House right now is to make sure that the administration is coordinated, so that the entire breadth of the climate action plan can be basically realized before the president leaves office,” McCarthy told the Hill in an interview published Thursday.

Rep. Ryan Zinke (R-MT), former commander of U.S. special forces in Iraq, sounded the alarm on the growing Iranian influence in Iraq, warning that it is “problematic” and will eventually lead to a “horrific scenario.”

“My view as a former deputy commander and [former] active commander of special forces in Iraq is that the Iranian influence has always been a destabilizing factor,” he said. “In fact, we’ve lost a lot of American blood as a result of direct Iranian support to insurgents and make no mistake Iran is not our friend, and to support Iran is tantamount to supporting our enemy.”

Tester said he wants Montana’s same-sex couples to have their marriages recognized in all 50 states.

This AP story was picked up by The Drudge Report over the weekend: Ex-stripper takes on sex traffickers in N. Dakota oil patch

When she first arrived in town, Windie Lazenko headed to the neon-lit strip clubs and bars catering to lonely oil field workers with extra cash and time on their hands. She knew these were likely gathering spots for the sex trade — the life she’d given up long ago.

For nearly two decades, Lazenko was part of that illicit world, starting as a 13-year-old runaway when, she says, she was bought and sold for sex. Prostitution, pornography and strip clubs followed. Then she walked away from it all. She eventually moved to Montana and a few years ago, while counseling at-risk girls, she began hearing about young women being recruited for prostitution in the Bakken oilfields. She wanted to help.

“Frankly, I’m going to talk a lot about yoga pants because I think that is the single thing that’s really got everybody in a tizzy,” Carville said, chuckling. “I’ll remind people that 50 years ago, people gathered on the Edmund Pettus Bridge (in Selma, Ala.) for the right to vote, and tonight we’re gathered in Montana for the right to wear yoga pants. You can’t even make this up.”

A Republican-led committee allowed nearly three hours of testimony in favor of a proposal to expand Medicaid to about 70,000 low-income Montanans before voting along party lines to give the bill an unfavorable report.

Many of the more than 200 supporters present spoke for and about a dozen people spoke against House Bill 249 known as the “Healthy Montana Plan” in a hearing that lasted 6½ hours Friday night.

Of course, that AP article doesn’t mention the real costs of Obamacare expansion: $250 million hit to the state budget…$62 million a year by 2023.

Montana state Senators voted to pass a bill to give schools bordering Montana’s oil country more of the taxes generated from oil development in their area.

Though this bill, Senate Bill 260, previously got unanimous support from the state Senators, many changed their mind. One of those is Senate Minority Leader Jon Sesso of Butte. He says the new version would end after 10 years instead of three, uses more money and it would be better rolled into the infrastructure plan.

“If we want to move $5 million of these natural resource payments to these counties, it should be in the context of the greater infrastructure program that we have in mind.”

The bill’s sponsor, Republican Senator Eric Moore of Miles City, says this would cost just as much, and that this money needs to get out of the older so-called “concentric circle models,” where excess taxes for schools goes back to Helena.

“So it’s a way to leap-frog, if you will, circles and get it out to some of the border towns where it’s needed.” 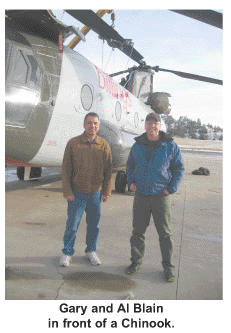 Al and Gary Blain have announced expansion plans for their business, Billings Flying Service. They anticipate more than doubling the size of their business over the next two years. Sparking the new vision for their company was the acquisition, several months ago, of three Chinook CH-47D helicopters, which they purchased from the US Government.

The three new machines will allow the brothers to ratchet up the level of service they can offer their clients. Billings Flying Service is already noted for the wide variety of heavy-lift helicopters they operate and lease. The CH-47Ds will add to that capacity, allowing them to lift much heavier loads in more adverse conditions