Two leaders in the gun-rights movement who know Montana well are coming out gunning on behalf of US House candidate Ryan Zinke (R-MT).

Earlier, the former president of the National Rifle Association (NRA) spoke in support of Zinke in this ad:

From the ad, Keene had this to say:

“Don’t be fooled.  Congressman Steny Hoyer, whom I know well, admits he wants John Lewis in Washington to help him, Nancy Pelois and Barack Obama get their anti-gun legislation passed.”

The Zinke campaign added this note to a press release touting the ad:

“I am honored to have the support of David Keene,” said Ryan Zinke. “He is a great leader and one of the most influential advocates of the 2nd Amendment. I am glad he has joined me in setting the record straight against the lies being spread by my opponent.”

Keene’s statement confirms what many Montanans expected all along—that John Lewis is misleading Montanans to get elected, and he is running a campaign full of Lewis Lies.

Another gun-rights leader has also made several trips to Montana to go hunting.

Tim Macy is with the Gun Owners of America and just sent this:

Not according to the money trail.

Anti-gun Reps. Nancy Pelosi and Steny Hoyer each contributed $4,000 to his campaign.

Both Pelosi and Hoyer are rated “F“with Gun Owners of America, the absolute lowest, most anti-Second Amendment rating a Member of Congress can receive. 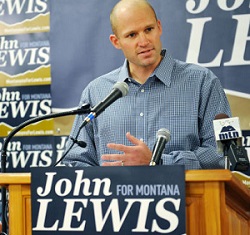 John Lewis also accepted a campaign donation from a consultant working for Mayors Against Illegal Guns, the Michael Bloomberg backed group which aggressively seeks to enforce gun control on all Americans.

If John Lewis really supports the Second Amendment and our God given right to keep and bear arms, then why does he keep accepting money from the very people working to destroy our Constitutional rights?

John Lewis bad for Montana, and bad for the Second Amendment.

I attended the debate last evening between Zinke, Lewis and Fellows. Fellows teetered and meandered off subject several times and only received loud applause (from the Republicans) after Lewis claimed AARP to be “non-partisan” and Fellows stated that everyone knew that to be a lie.

Lewis most often failed to answer questions and stayed on script provided by the democratic machine. At the point when Lewis stated how the AARP was non-partisan and an honorable organization, laughter and jeers erupted from the Republican side, prompting the Fellows reply. Probably one-third of the room was loud and vocal Lewis supporters.

Zinke provided direct answers to all questions, completely and clearly defining his stance and the actions he will take on all subjects brought up during the debate. When John Adams of the Tribune Capitol bureau accosted him about his military service, Zinke forcefully and directly answered his question. Adams pressed again…… And Zinke destroyed him. HOORAW !!!

In my opinion, Zinke quietly, honorably and directly controlled the debate with honest statements of his positions on all matters of discussion. He was the clear winner by a large margin.