“Can a Bottle of Wine Sink a Political Campaign?” That’s the headline of a story in the latest issue of The Montana Pioneer. For those who caught my previous post, this is a must-read update.

As it turns out, The Chicago Tribune did a little more digging into that bottle of wine being carried by Chicago’s Democratic Mayor (and former Obama chief of staff) Rahm Emanuel as he entered a Paradise Valley, Montana restaurant with Illinois’ Republican gubernatorial candidate Bruce Rauner.

Here’s a screenshot of the article, which just posted to the Pioneer website: 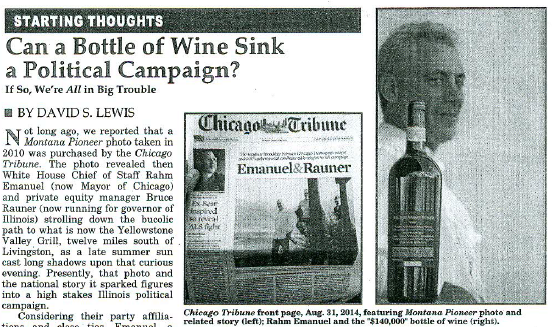 The Chicago Tribune, though, took time to decipher the text of the label, which revealed the wine to have been the product of the Napa Valley Reserve, an invitation-only culinary and wine club requiring a $140,000 membership.

The Chicago Tribune (and others) noted this so-called “$140,000″ bottle of wine, placing the photo on the front page of its Friday, Aug. 29, online edition, and also on the front page of its Sunday, Aug. 31, hard copy edition (see above). The Tribune story dealt with the photo, the wine, this publication and its restaurant reviewer (whence the wine bottle revelation originated), and extensively with the relationship between Emanuel and Rauner.

Rauner found himself characterized as a man who pays more for wine than most Illinoisans make in a year (never mind he’s an owner of the club), while his opponent vowed to live on minimum wage for an entire week eating crackers, as he pandered to lower income earners. So, the media shilled for Quinn, the Democrat (surprise) and used our photo of Rauner (a Republican) and his wine as a symbol of wealth and privilege, effectively making him the bad guy (reflected, by the way, in a sudden reversal in the polls), even as they promoted the campaign talking point that Quinn mows his own lawn with an antiquated lawn mower, portraying him as a regular guy (our next photo should be of Quinn’s Guatemalan gardener, but he’s probably been sent home until after the election.)