This past Thursday on Montana’s only statewide radio talk show, “Voices of Montana,” I relayed the sad news that David Berg passed away.  As I mentioned on the show, I didn’t get the opportunity to know David Berg too well- but I do know that the show would not have the reach that it has today without David Berg.

I had the chance to honor David Berg as I spoke with his first “Berg in the Morning” producer JP Donovan, who later went on to serve as Communications Director to then-Senator Conrad Burns (R-MT). Click below to listen:

The official obituary came out over the weekend.  Here’s an excerpt, along with funeral details set for Tuesday afternoon in Billings.

The talent that you noticed right off the bat when you first met David was his golden voice. David started in radio and television in California, where he was born and raised in dairy country west of San Diego. He worked as the radio person/photographer for the San Diego Padres, worked with Wolfman Jack, was Michael Reagen’s talk show producer, a policeman, a stand-up comic, a published author and a professional clown.

During David’s time in Montana, he changed the landscape of radio and television. He worked for Northern Broadcasting Company and began the first statewide talk show, known as Berg in the Morning, and then changed to the Voices of Montana. David also began Road Watch Montana, which also continues today on several radio stations and on Q2 in Billings. While at Q2, he also did a daily cartoon called Q2Toons, which were usually political in nature, as David was a very well-liked conservative who changed the landscape of politics in Montana.

Memorial services will be at 1:30 p.m. Tuesday, May 13, at Faith Chapel, 517 Shiloh Road, Billings, MT. Interment with Military Honors will be at Mountview Cemetery.

Here is an old promotional document I came across from Berg’s days here at Northern Broadcasting: 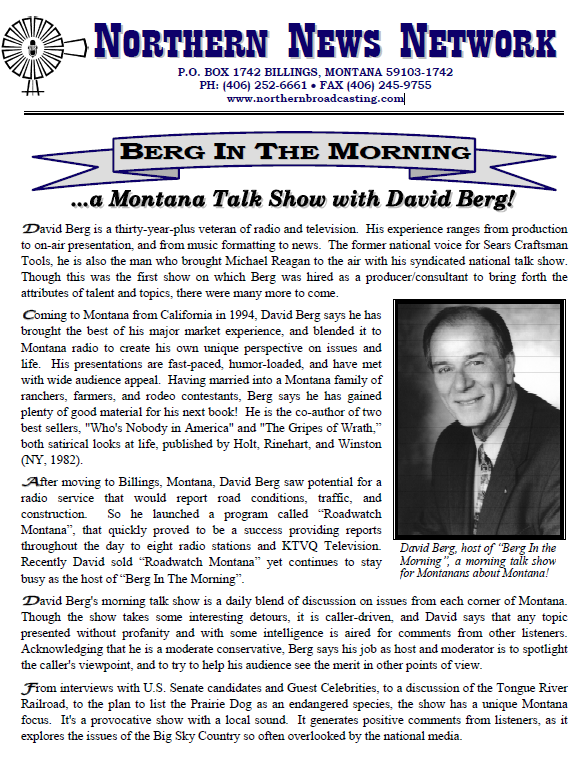