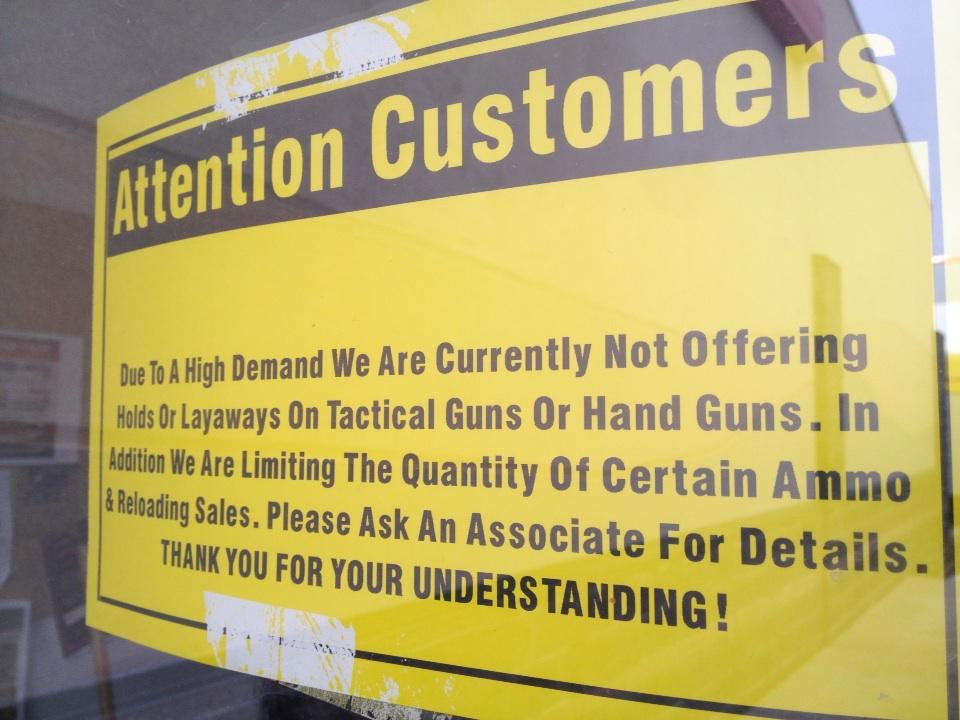 When it comes to the reaction here in Montana following calls for more gun control laws, the above picture says it all.  Great Falls Tribune reporter John Adams snapped the above picture at Bob Ward’s in Helena on December 20th.

The night before, the Gun Owners of America gained over $46,000 in new memberships across the country.  You can thank CNN’s Piers Morgan for that.  The TV host and foreign national tried to berate the head of the Gun Owners of America on national TV for his support of the 2nd Amendment.  At one point Piers Morgan said to GOA Executive Director Larry Pratt, “You’re an unbelievably stupid man, aren’t you?. Click the video below to view the dignified and to-the-point response by Pratt:

One of those new memberships went to none other than Piers Morgan himself.  Tim Macy, the Vice Chairman of the board for the Gun Owners of America, tells me that one of his fellow gun owners responded to Piers Morgan with kindness you’d expect in the Christmas season and purchased him a GOA membership.  Welcome to the club Piers.

Below is a guest opinion column by Macy.

With the recent horrible shootings around the nation, the left-wing — led by President Obama, some members of the Senate and House, and most of today’s media — are screaming for new gun control laws.

But what would the consequences of such laws be?

No wonder the Congress allowed the useless gun ban to “sunset” after ten years — it didn’t work, period!

Despite the fact we have these new incidents where innocents were murdered, gun murders themselves have drastically dropped over the last two decades. Why?

Noted gun-crime author and statistician, Dr. John R. Lott, attributes much of this to the increase in “concealed carry” permits issued nationwide to ordinary citizens, which now allow them to carry weapons for personal protection and the protection of others. These laws have reduced crime because potential perpetrators don’t know who’s carrying for personal protection.  In fact, according to FBI data, U.S. murders dropped nearly 40% to 14,478 in 2010 — a significant drop from 23,440 in 1990 — even as the overall population grew by 24 percent!

This may be why Dr. Lott’s most famous book is titled “More guns, less crime.”

So, if Congress really wants to reduce crime and to stop shootings at so-called “gun-free zones” like schools, movie theaters and other places, maybe they ought to pass laws making it easier for citizens — especially teachers and school administrators — to get the training they want to be proficient in gun safety and proficient in hitting their target with a concealed handgun.

Most freedom-loving Americans understand that this administration and many in Congress are radical anti-gun members of the Left. They know America and our Constitution are much safer when the Second Amendment is in full force. And that is exactly what they want to change. They are in this for the power, plain and simple. They want control over every aspect in American life, and they are moving at break-neck speed to attain their goal.

Many nations that have given up their rights to gun ownership have suffered by the hand of their own government shortly thereafter. Over 170,000,000 (that’s one hundred and seventy million) human beings have been slaughtered by their governments in the 20th Century after they gave up their guns.

I pray they don’t. That’s why Gun Owners of America was formed to fight the anti-gunners in Congress and in every State house in the nation.

Tim Macy is the Vice Chairman of Gun Owners of America, a national gun lobby with over 300,000 members