Well, if you can’t earn the veterans support, why not try and buy it?  That appears to be the case in downtown Billings, Montana as a national liberal veterans group is opening up shop and seeking paid campaign workers.  It’s all part of an effort by national Democratic front groups to try and tip the scales in one of the most important Senate races in the country- the race between incumbent Sen. Jon Tester (D-MT) and Congressman Denny Rehberg (R-MT).

Readers of this blog and listeners to our statewide radio talk show began noticing flyers on street poles in downtown Billings this week.

The flyers (pic posted below) read:

“VETERANS NEEDED FOR CAMPAIGN JOBS…Help Re-Elect Senator Jon Tester!…Earn $12 per hour. The poster also gives out a phone number to call if interested.

The same information can also be found on Craigslist.  I called the number available and ended up speaking with Davi Weber who informed me that VoteVets is behind the flyers.  When I asked where she was from, she hung up the phone, but she did tell me that VoteVets has set up shop near 9th and Broadwater in Billings (a location frequently used by Democratic operatives).

VoteVets is a national liberal political group which describes themselves as the “the largest progressive organization of veterans in America.”

“VoteVets.org has, and will continue to, work with all progressive allies representing labor, immigration, gay and lesbian rights, and environmentalists, when their issues coincide with the needs of troops and veterans.

You may also recall that VoteVets is behind a TV attack ad against Congressman Denny Rehberg (R-MT) that another national vets group, Vets For Freedom, called “disgraceful.”

“Whether it’s fighting for their promised pensions, increased funding for medical research, or against increases to their healthcare costs, Denny Rehberg has been a strong advocate for warfighters in Montana and across the country,” Hegseth said. “This is an important issue where Democrats and Republicans find common ground. For VoteVets to use wounded vets to turn this into an election-year attack is disgraceful.”

While most veterans won’t buy the partisan rhetoric coming out of groups like VoteVets, the use of veterans in campaign commercials like this have less to do with swinging veterans to vote their way, and more to do with swinging independents.   The hope is that undecided voters may get the faulty assumption that somehow candidate A cares more about veterans than candidate B.

This isn’t the first election cycle in which Sen. Tester has attempted to politicize veterans issues for his own personal gain.  In 2010, while campaigning in support of Senator Harry Reid (D-NV), Tester criticized Reid’s opponent for “trying to privatize the VA.” (Try telling a veteran who has to sit in her car for 4 hours to visit the VA that the VA doesn’t need reform.)

Eric Schmeltzer, the national spokesman for VoteVets, confirmed that his group is behind the flyers and the Craigslist ad.  He did not respond to a question concerning their need to pay campaign volunteers, but he said that VoteVets is just now getting their operation in Montana underway. 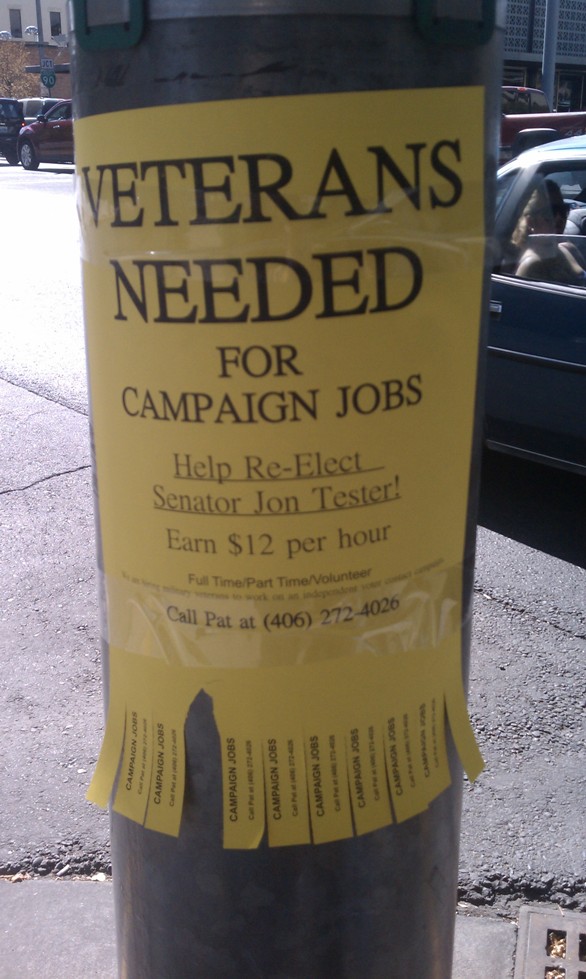