You either sign off on a bad deal, or you go to war with Iran.  That’s the absurd rhetoric coming out of Sen. Jon Tester (D-MT) and liberal commentators in Montana.

How over the top is the Left getting over this debate? It seems best signified by this absurd post by Pete Talbot at Don Pogreba’s liberal blog.  Here’s a screenshot: 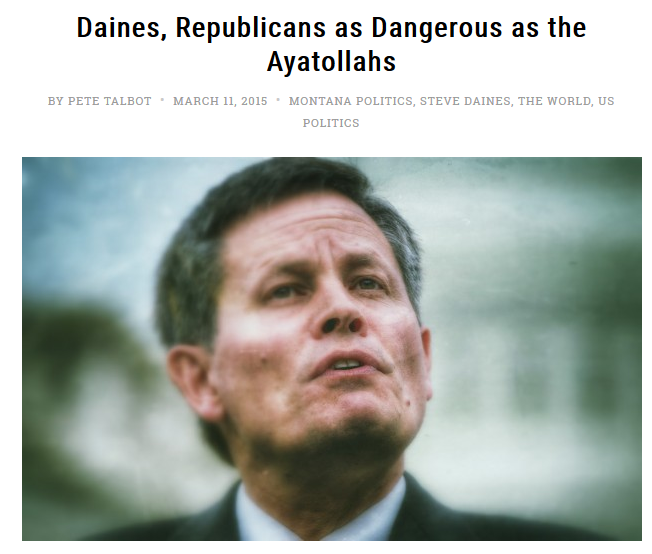 Not that Senator Daines needed to explain why he would be right to remind the Iranian regime that the president alone, and without consent of the United States Senate, cannot enter into a treaty (especially one that may help the Iranians get nukes)…but Daines offered this explanation to Lee Newspapers anyway:

“We’re seeing senators on both sides of the aisle who want to make sure that an agreement must go through Congress,” he said in an interview with the Missoulian State Bureau. “I think it’s important that the American people’s voice is heard in any final agreement with Iran.”

Montana’s Democratic U.S. senator, Jon Tester, on Wednesday called it “a reckless call to war,” because the lead drafter of the letter, U.S. Sen. Tom Cotton of Arkansas, has said he wants to stop the administration’s negotiations to block Iran’s development of nuclear weapons.

Echoing Tester’s rhetoric, a John Kerry-liberal legislator from Missoula is also attacking those who oppose the deal:

This sent the Obama administration and its media allies into a tizzy of rage. After all, it is one thing for the president of the United States to send secret love letters to the ayatollahs; it is quite another for GOP members of the Senate to warn the Iranians that they will not abide by a bad deal.

Vice President Joe Biden said that the Republican letter was “beneath the dignity of an institution I revere,” adding, “In thirty-six years in the United States Senate, I cannot recall another instance in which Senators wrote directly to advise another country – much less a longtime foreign adversary – that the President does not have the constitutional authority to reach a meaningful understanding with them.”

So, what were the 7 different times, at least, that Democratic members of Congress reached out to America’s enemies?  Breitbart has the full back story in the link above on each of these instances: Senators John Sparkman (D-AL) and George McGovern (D-SD). Senator Teddy Kennedy (D-MA).House Speaker Jim Wright (D-TX). Representatives Jim McDermott (D-WA), David Bonior (D-MI), and Mike Thompson (D-CA). Senator Jay Rockefeller (D-WV). House Speaker Nancy Pelosi (D-CA).

The more time you debate “Did congressional Republicans insult the president by inviting Bibi Netanyahu to address them?”, the less time you are debating “Is this deal with Iran a good idea?” or “Are we forcing our allies the Israelis to live with an unacceptable risk?”

The more time you debate “Did 47 Senate Republicans undermine or disrespect the president by writing that open letter to Iran?”, the less time you are debating “Can we trust the Iranians to keep their word?” or “Shouldn’t something that looks like a treaty, sounds like a treaty, and has the impact of a treaty be ratified by the Senate like a treaty?”

Meanwhile, it looks as though Senator Tester’s- sign a bad deal or go to war- approach is only encouraging a greater expansion of a nuclear Middle East…

That agreement, along with recent comments from Saudi officials and royals, is raising concerns on Capitol Hill and among U.S. allies that a deal with Iran, rather than stanching the spread of nuclear technologies, risks fueling it.

The “added risk” of Saudi going nuke – without input or discussion with the USA etal is A BIG F***ing DEAL too!
Can no one seem to remember, Saudi is the main funding source for “most” of the terrorists around the world today? Sure, Iran and a few others are involved as well…but, the BIG BUCKS come from the royal family members of Saudi.

The failure of our present day admin to address “actual” problems WITH ALLIES is making this a very dangerous world!