Hey, check it out…it’s our friend “Ken from Great Falls.”  I’ve always enjoyed getting phone calls from Ken.  But here’s what is interesting- the regular caller to our statewide talk show Voices of Montana, and radical Leftist, is teaming up with conservative legislators like Art Wittich (R-Bozeman) and Randy Pinocci (R-Sun River).

Here’s the screenshot of The Great Falls Tribune story from my smartphone: (h/t a listener in Great Falls) 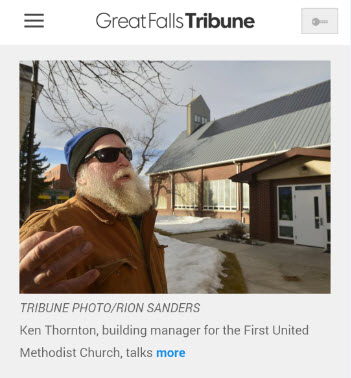 Ken was featured in this article by The Great Falls Tribune about the topic of “net metering.”  Here’s an excerpt:

Renewable energy has been seen a Democratic issue, Pinocci said, but Republicans are getting involved now and he doesn’t care whether it’s a Republican of Democratic issue. In his view, limits on the size of renewable energy projects in areas served by rural electric cooperatives is discouraging investment in renewable projects in rural areas. Pinocci, a freshman, said lawmakers shouldn’t be influenced by lobbying from NorthWestern or rural cooperatives.

Over the past five years, the price of solar panels has dropped 80 percent as the result of the recession and competition from China, Thornton said.

So, if a radical Leftist like Ken can team up with conservatives like Rep. Art Wittich (R-Bozeman), what could possibly be the problem with net metering? Click here to read the full article by Karl Puckett.

Ken, please tell me it’s not so!

Are you really advocating selling excess energy you generate back to the energy company? Gad zooks!

Having been subjected to your wild off-the-wall leftist rants for the past 20 years, now you’ve completely shattered my perception of you! How disappointing!

But it goes to prove common sense eventually prevails when it comes to the unbridled economic opportunity afforded to all by this great and wonderful country we live in.