“American Sniper” co-author Scott McEwen joined us today on Voices of Montana. Some of you got to meet or hear Scott when he was in Montana joining Rep.-Elect Ryan Zinke (R-MT) on the campaign trail last Spring.  (Zinke is the first Navy SEAL elected to the US House)

After the limited release of the film “American Sniper” based on the book about legendary Navy SEAL Chris Kyle, what does the co-author himself have to say about the movie?

Click here to listen to McEwen on Tuesday’s Voices of Montana.  (By the way, earlier in the same show I interviewed Michael Reagan, the son of President Ronald Reagan, and he said the movie is definitely a must-see that pays tribute to all servicemembers.)

Here’s the trailer that will bring tears to your eyes: 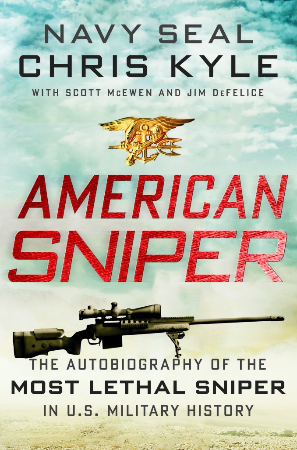 Here’s a couple of other noteworthy reviews.

American Sniper, which was directed by Eastwood and stars Bradley Cooper as famed navy SEAL sniper Chris Kyle, became the top specialty debut of the year and the best ever for a limited Christmas release.

American Sniper has received rave reviews, with the New York Post’s Kyle Smith calling it “the year’s most extraordinary film.”

In early scenes of “American Sniper,” which is based on the true story of Chris Kyle, we get a taste of what kind of man he is going to be. As a kid growing up in Texas, he goes deer hunting with his father and hits a long-distance target using a rifle almost as big as he is. At school, he pummels a bully who picks on his little brother. At the dinner table, Dad tells the boys there are three kinds of people in the world: wolves, sheep and sheepdogs.

A virtuoso behind the trigger, Mr. Kyle famously hit a target over a mile away and became, over four tours of duty from 2003 to 2009, the deadliest sniper in U.S. military history, with more than 150 confirmed kills.

Mr. Hall says he’d heard tales of Mr. Kyle, how he put a bullet in a human target in Iraq from 2,100 yards. Mr. Hall asked an acquaintance—a former SEAL working for the CIA—if that could be true, and the CIA contact scoffed. “He said, ‘There are five guys on the planet who can hit that shot.’ I asked him to check it out. Later I get a call back from him and he says, ‘That guy you asked about? He’s one of the five.’ ”