It’s been quite the ride for appointed Sen. John Walsh (D-MT).

I mean heck, I know he had to battle some Class 5 rapids (an Army IG report, mismanagement at Montana DES, Harry Reid’s phone call appointment)- and that was before his campaign finally slammed into the rocks this past August (NY Times, plagiarism, War College).

But look what he’s been able to do since that time as an appointed United States Senator.  Floating the North Fork of the Flathead River on the border of the greatest place in the United States- Glacier National Park (even though you can’t get the bill to float past the Democratic-controlled US Senate).  Then, he got taxpayers to pay for his hiking trip along the Rocky Mountain Front.  And, what better way to top it all off than with a nice glass of whiskey- from almost every single distillery in the state of Montana? 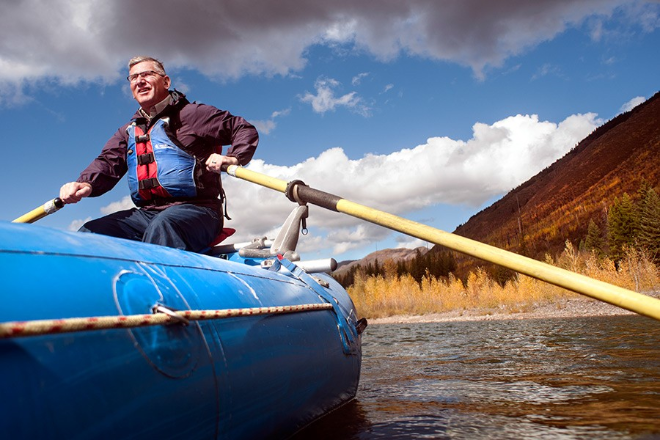 Greg Lindstrom’s photo of Sen. John Walsh (D-MT) used with the permission of The Flathead Beacon

You might be mad, but I look at Sen. Walsh floating the river, enjoying a good hike, and sipping whiskey all across the state- and I just think of Forrest Gump’s drill sergeant.  This man must be a [BLANK BLANK] genius!

Ah yes…the life styles of the rich and the infamous!

Too bad we surfs can’t indulge ourselves on the hard earned dollars of the stupid taxpayers.

Let’s see if he will cowboy up and let Daines secure a little seniority. How about it Senator Walsh? Are you going to carry the water for Harry Reid to the last minute or give Senator Daines a leg up for the sake of Montana?

This FRAUD of an appointed Senator owes the State of Montana back pay reimbursement for FALSELY claiming RANK and COMMAND OF THE MT. NAT GUARD based on a non-existent MASTER’S degree which was a prerequisite for that RANK and POSITION!

Tim Fox needs to pursue back pay, loss of Rank and position, and reduction of pension benefits against the FRAUD WALSH, unless he resigns immediately!

A prime example of a true democrat.

Of course it makes sense for Walsh to step aside and allow Daines to garner the seniority over other newly elected Senators. With Daines in the Senate seat, Zinke could gain the seniority in the House as well. However, that would take depth of character, a sense of honor and commitment to Montana and the nation which Walsh does not posses. And Bullock and Tester are no statesmen either.

I know a man who served with Walsh and when we spoke of him stepping aside he said that Walsh would stay if only to stoke his ego.