Fox News and Commentary radio host Todd Starnes delivered a hallmark speech in defense of religious liberty Thursday night in Billings, Montana.  Starnes brought the sold out crowd to their feet as the keynote speaker for the Montana Family Foundation banquet at the Northern Hotel.

I caught up with Starnes after his speech for a sit down interview.  He says religious freedom, and not same-sex marriage, is THE civil rights battle of our time.  Anytime you hear non-discrimination, “hold on to your seat,” says Starnes.

What a great turnout last night in Billings, Montana! Packed house and we sold out of God Less America!

The morning after Starnes delivered a stunning portrayal depicting the attacks on Christians and religious freedoms across the country, Montanans were met with fresh headlines of what may be yet another attack on a Bozeman Christian school.

Fire crews responded to a reported fire at Heritage Christian school in Bozeman early Friday morning.  A fire in the school’s gym two years ago was investigated as arson and closed the school for several months.

The MCAA volleyball tournament, which was scheduled to be held at Heritage Christian, has been moved.

It was just last year that the FBI was offering a reward to lead to the arrests of anyone involved in multiple attacks on churches in the Bozeman area.

The FBI is offering a reward of up to $5,000 for information that leads to the identification, arrest, and conviction of the person or persons who vandalized three churches in Bozeman, Montana. The FBI is investigating the matters as a hate crime due to the sheer volume of profane anti-religious graffiti and acts of arson discovered inside the churches. In addition, suspects are facing potential state felony charges associated with arson, burglary, and defacing a religious institution.

Anyone who has information about the incidents or the person or persons who committed these acts is asked to contact the FBI’s Bozeman Office at (406) 994-0927, the Bozeman Police Department at (406) 582-2010, or the Montana State University Police at (406) 994-2121 or to e-mail tips to the FBI Salt Lake City Division, which covers Montana, at SaltLakeCity@ic.fbi.gov.

Photo below courtesy of the 2013 FBI webpage documenting church vandalism in Bozeman, Montana. 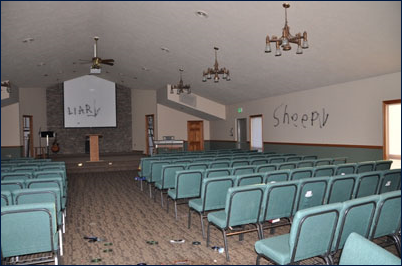