FULL RELEASE FROM THE BOARD OF PARDONS AND PAROLE 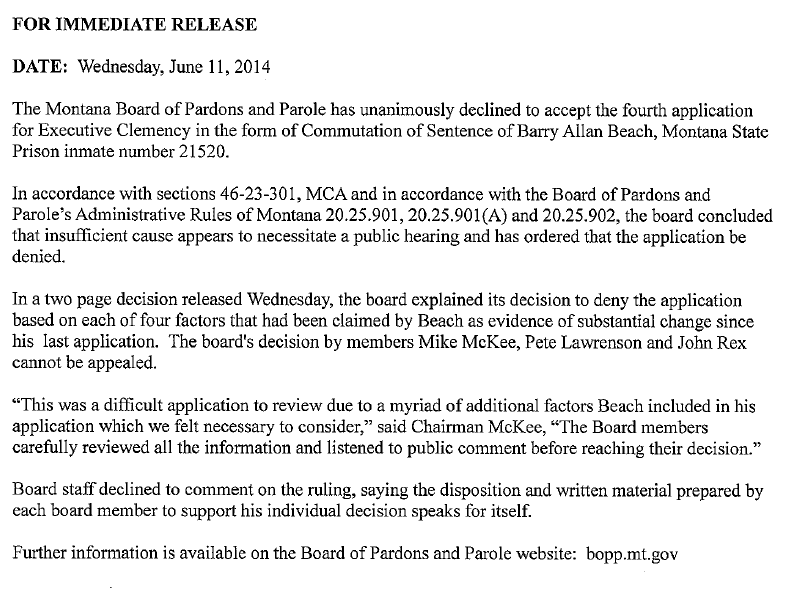 The MT Board of Pardons and Parole to hold press conference Wed. at 11 a.m. to announce the decision in the #BarryBeach clemency application

The board is considering whether to accept #BarryBeach‘s latest application for executive clemency. If accepted, investigation would ensue.

If the application is denied, then Beach will not be granted clemency or parole and he will likely pursue his release through federal courts

There is no evidence that proves him to be the person that did this. The evidence does prove it was not him! Some women are walking around Poplar, free, that actually killed Kim!
Yes! He confessed, he was a kid, he was basically forced. He didn’t know any better, he was just tired of them hounding him. He just wanted them to stop!
AGAIN…show me ANY EVIDENCE that says it was Barry! Right! There is none.

My emailed comment to AG Tim Fox concerning his statement in support of the BOPP decision follows:

A mighty sad day for Montana!

The BOPP decision defies common sense and insults the intelligence of all Montanans!

Your statement this will lay the Barry Beach case to rest only adds to the insult heaped upon Montana citizens today by the BOPP. It is laughable! This case will rest when the actual perpetrators are brought to justice and/or Mr. Beach is a free man.

Our justice system is broken and you, sir, are part of the problem. After thirty years of trying, the State of Montana now willingly admits it failed to rehabilitate a 17 year old kid who, in truth, did not need rehabilitated to begin with. Some success rate!

Along with thousands of Montanans, our Governor, our senior Montana Senator, and the mayor of Billings thought the clemency application should be approved. And when it was not, you have the audacity say it was a correct decision? That takes some stones! It seems you and Mr. ‘No Mistakes’ Racicot are on the same end of a very short stick.

See you in the newspapers across the state and on Voices of Montana come re-election time Mr. Fox. I and many others are so looking forward to it!

Perhaps we need to encourage those who are running for the state legislature to look into legislation changing the procedures followed by the Parole Board?

As it stands there is no oversight, they answer to no one, which might be ok except they are not required to make their deliberations public. If they want to operate in private consultation, then they need to publish in detail how they arrived at decisions, what they considered, what they ignored and why they concluded to approve or not.

Because of publicity, certain cases are watched not only by Montana citizens, but nationally, Such cases require more than the cursory explanation provided today by the BOPP.

In some cases, an independent review of the factors considered to reach a conclusion might be in order to ensure BOPP guidelines and rules are being followed. Perhaps they are , but in whose view? Just sayin?

Subsequent to making the above posting, I visited the BOPP website to review the rationale used by two of the board members, McKee and Lawrenson, to arrive at their decision. Perhaps I was premature in making suggestions to improve what I considered questionable procedures but here is a Link to the published rationale by the BOPP members McKee and Pete Lawrenson

In reading what they wrote I became intrigued with the idea they are actually prosecutor, judge, and jury combined. That is a lot to ask anyone. No wonder they become somewhat arrogant when wielding such power with no one to oversee, criticize, or review their deliberations. And McKee has been at it ten years!

I read criticism of AG Fox but it is his duty, to prosecute for the MT citizens or to defend the MT citizens and he is doing what he is duly sworn to do. Unlike the last AG now Gov. Bullock who refused to defend the wishes of MT citizens to join with the other 28 states AG in the suit against Washington’s over reach, defying the US constitution, state constitutions and violations of states rights with ObamaCare, for obvious political reasons. The AG like the rest of the justice system should be blind to politics and personal political views! But in the case of ObamaCare the justice system along with the MT AG, even admittly, was blind to neither!