He was the first SEAL to jump out of the bird during the mission to save Captain Phillips, as depicted in the Hollywood blockbuster.

So why shouldn’t a Butte, Montana native named Rob O’Neill, on this St. Patty’s Day, be the first to jump into the diplomatic post in Dublin?  (For those who aren’t aware- Butte, Montana is one of the best St. Patrick’s Day locations in the world)

As The Irish Times reports, there has been a record 15-month delay in searching for a new US ambassador to Ireland.

One has to go back to 1935 and President Franklin D Roosevelt’s appointment of Alvin Mansfield Owsley as the US envoy to find a delay almost as long. Then it took 13 months.

There have been some embarrassing moments during Senate confirmation hearings for Obama’s handpicks.

Max Baucus, the Democratic senator from Montana selected to be ambassador to China, admitted: “I’m no real expert on China.”

So why not send in SEAL Team 6’s Rob O’Neill to serve in the diplomatic post?

Here’s what The Montana Standard reported after he spoke in Butte last December at a fundraiser for Butte schools:

He served as the lead jumper on the mission to rescue Capt. Richard Phillips, whose ship was taken hostage by Somali pirates in 2009 in the Indian Ocean. The Tom Hanks’ movie “Captain Phillips” is based on that incident.

O’Neill helped save Navy SEAL Marcus Luttrell, the only survivor in a failed mission to capture a Taliban leader. “Lone Survivor,” a film starring Mark Wahlberg based on those events, comes out in January.

When O’Neill was in these intense scenarios he would often think of his hometown, where his family still lives.

Here’s a bio and video showing O’Neill, who served as a team leader with Naval Special Warfare Development Group:

Rob O’Neill is one of the most highly-decorated combat veterans of our time. He was a team leader with the Naval Special Warfare Development Group. He has deployed more than a dozen times, and he held combat leadership roles in more than 400 combat missions in four different theaters of war. A highly-trained Navy SEAL, he led the military’s most elite and was involved in our nation’s most important campaigns. With most of his career shrouded in a classified cloak, O’Neill was the man on the ground we have never heard of but know exists. He was one of the quiet professionals performing the most difficult tasks in the most difficult circumstances, serving his remarkable career in the shadows and keeping America safe in the process.

By the way, I was hoping to chat with Rob and his big brother Tommy (of KXTL radio fame) from Boston today.  Sounds like they had a great time at the Dropkick Murphy’s show last night.

Photo of Rob O’Neill from LeadingAuthorities.com 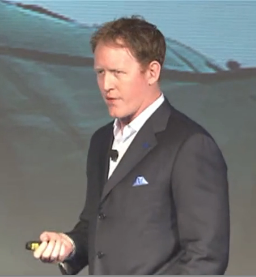