Rep. Austin Knudsen (R-Culbertson) says that only 3 Montana House Democrats voted to override Governor Steve Bullock’s (D-MT) veto when it comes to infrastructure funding for Eastern Montana.  The three, according to Knudsen (I have not yet done my own independent line-by-line check): Bridget Smith of Wolf Point, Bill McChesney of Miles City, and Tom Woods of Bozeman.

While state senators from as far away as Butte, Bozeman, Chinook, Missoula, Kalispell and elsewhere voted to support the override- Billings legislators like Rep. Margie MacDonald, Rep. Virginia Court, and Sen. Kendall Van Dyk voted no.  Sen. Robyn Driscoll apparently didn’t even vote, according to the chart below from the Montana Secretary of State’s office.

Given all of the economic activity taking place in Billings thanks to the Bakken oil activity, where were the Billings Democrats?  Will they be held to account by the Billings Chamber, Big Sky EDA, county commissioners and others who recognized the importance of this infrastructure funding?

Chuck Johnson has reaction from Rep. Duane Ankney (R-Colstrip), the bill sponsor, in The Billings Gazette:

Ankney said Monday night that he had calls from House Democrats in recent weeks expressing regrets that they couldn’t support him on the override vote because of pressure from Bullock and his staff.

“I’ve had bills vetoed, that’s the way the pickle squirts,” Ankney said. “But this one. … I really thought at first we could do it because of the support I was getting from the Democratic House members. Then that support started to dwindle.”

In the previous article by Chuck Johnson, Ankney noted that legislative Democrats were receiving pressure from the Governor.  That’s odd, because when I ran into the Governor last week, he told me that he wasn’t tracking how individual legislators were voting when it came to the override votes.  Sounds like someone here is misleading us…

Anything I’m missing?  Another angle that you think needs to also be pointed out?  Let me know, I’m interested in hearing from you.

Scroll down to view a rundown of the full vote from the Secretary of State’s website: 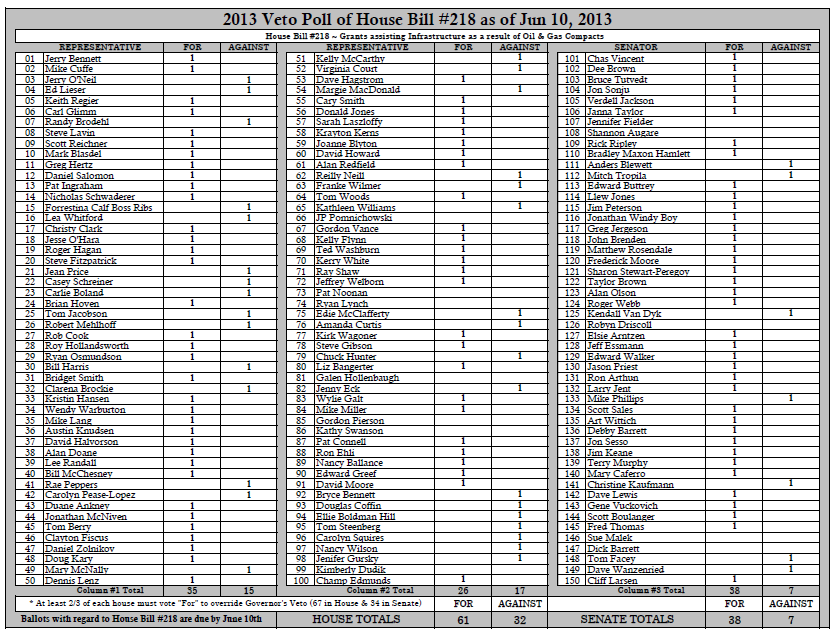