Following two weeks of blistering criticism from the Foundation for Individual Rights in Education (FIRE) and commentators nationwide, the United States Department of Education’s Office for Civil Rights (OCR) is attempting to defend a controversial speech code “blueprint” that requires colleges and universities to expand their definition of sexual harassment to include speech protected by the First Amendment. 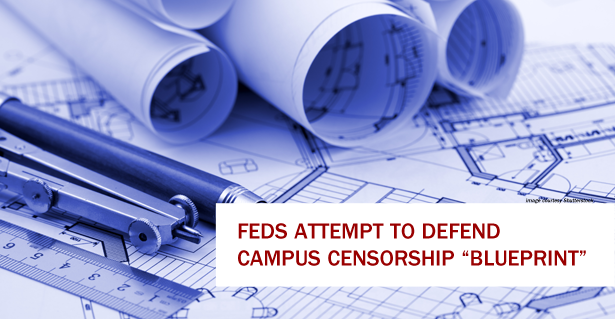 WASHINGTON, May 30, 2013—Following two weeks of blistering criticism from the Foundation for Individual Rights in Education (FIRE) and commentators nationwide, the United States Department of Education’s Office for Civil Rights (OCR) is attempting to defend a controversial speech code “blueprint” that requires colleges and universities to expand their definition of sexual harassment to include speech protected by the First Amendment.

Yesterday, OCR sent a statement to concerned students, faculty, alumni, administrators, and citizens who have written the agency to express outrage over the threat to free speech presented by the May 9findings letter and resolution agreement authored by OCR and the Department of Justice (DOJ) to conclude an investigation into the University of Montana’s practices regarding sexual assault. OCR and DOJ proclaimed the letter and agreement to be “a blueprint for colleges and universities throughout the country.”

The “blueprint” requires colleges and universities receiving federal funding to define sexual harassment as “any unwelcome conduct of a sexual nature,” including “verbal conduct” (speech). OCR and DOJ explicitly state that an institution’s definition of sexual harassment may not include a “reasonable person” standard, effectively granting the most unreasonably sensitive students the power to determine what sexual or gender-based expression is permissible on campus. OCR even suggests that those accused of sexual harassment must in some instances be punished before an investigation has been completed. Institutions that do not adopt this breathtakingly broad definition, which contradicts decades of legal precedent and OCR’s past guidance, risk being found in violation of Title IX and losing federal funding.

“The Office for Civil Rights’ weak attempt to walk back its disastrous May 9 letter is too little, too late,” said FIRE President Greg Lukianoff. “OCR’s belated lip service to freedom of expression following a national firestorm of criticism is hardly sufficient to undo the damage of a 47-page ‘blueprint’ that doesn’t once mention the First Amendment or freedom of speech. FIRE calls on OCR to immediately issue a swift and detailed retraction and clarification to every college and university in the country.”

“OCR argues that a broad definition of sexual harassment encourages reporting, but mandating that state and private employees must report protected expression to authorities as ‘harassment’ is no more acceptable than requiring the reporting of ‘unpatriotic’ speech as treason,” Lukianoff continued. “In just over two years, OCR has reduced due process protections for students accused of serious misconduct, issued dangerously vague guidance on ‘bullying,’ and is now mandating a definition of sexual harassment that will render virtually every student and faculty member guilty of harassment. The agency is out of control. OCR must reverse its attack on student and faculty rights before it is forced to do so by courts, legislators, and universities themselves.”

FIRE is a nonprofit educational foundation that unites civil rights and civil liberties leaders, scholars, journalists, and public intellectuals from across the political and ideological spectrum on behalf of individual rights, freedom of expression, academic freedom, due process, and rights of conscience at our nation’s colleges and universities. FIRE’s efforts to preserve liberty on campuses across America can be viewed at thefire.org.

Tell the federal government to issue an immediate retraction and clarification of the federal “blueprint”!