I’ve been away from the blog for a few days as I have been travelling the state attending statewide candidate debates.  While I haven’t been blogging as much in the past few days- we have had some great updates and conversations via the #MTPol hashtag on Twitter.  In fact, if you haven’t done so already- give me a follow @aaronflint on Twitter.  Especially during these live debates, it is a great way to get instant reaction, and also see the instant spin coming out of both sides.

One of the more interesting lines of attack during Thursday night’s gubernatorial candidate debate in Butte, Montana- a union stronghold- was when former Congressman Rick Hill (R-MT) criticized Attorney General Steve Bullock (D-MT) for not joining Attorneys General across the nation in opposing the federal government’s new mercury standard for coal-burning power plants.  That new mercury standard is forcing PPL Montana to mothball the Corette power plant in Billings, costing the county and state over $3 million and 35 jobs- 29 of which are union jobs.

That line of attack combines with Bullock’s opposition to developing the Otter Creek Coal Tracts.  The topic of Otter Creek also came up during the debate, as The Montana Watchdog reports.

As a sitting member of the Land Board in March 2010, Attorney General Steve Bullock, a Democrat, probably didn’t anticipate catching so much grief over his vote to oppose development of the Otter Creek mine in southeastern Montana.

Bullock held firm on his 2010 vote as a member of the state Land Board, the custodian of Montana-owned lands and certain resources. The Democrat explained to the capacity crowd stuffed into the Montana Tech auditorium that he felt St. Louis-based Arch Coal, the investor, would pay too little for the 572 million tons of coal available under the proposed agreement.

I found it interesting that during Thursday night’s debate, The Montana AFL-CIO was all aTwitter against Hill, yet seemingly failed to mention anything concerning the 29 union jobs that will be lost at the Corette plant.  In fact, the AFL-CIO is actively campaigning against Hill, as The Hill reports.

Brad Anderson with the conservative Montana Headlines blog said Hill delivered a “body blow” to Bullock on the issue:

It seems as though Bullock has a problem choosing which battles to fight. He could tilt at windmills by trying to take down Citizens United singlehandedly. But he couldn’t be bothered to file a brief against Obamacare in spite of that law’s unpopularity in Montana, and he wouldn’t join in challenging EPA coal regulations in spite of his claim to support coal development.

For more coverage of the Bullock-Hill Montana Standard debate, click here to read the AP story following the event in Butte.

Now, I don’t read too many of The Billings Gazette editorials anymore- I understand they unleashed a slew of editorials backing Democratic candidates this week (is that a corporate contribution from Lee Newspapers?).  Nothing new on that front.  So, maybe the Gazette ran an editorial against the EPA and the future shutdown of a coal plant in their own backyard, and maybe they didn’t- who knows.  I did notice that the news story itself was buried in a secondary section of the paper.

But Montanans as far away as Kalispell certainly understand.  Brad Anderson also linked to this Daily Inter Lake editorial blasting the “war on coal.”  Here’s an excerpt:

It’s an outrage that the federal government’s Environmental Protection Agency is effectively killing jobs and tax revenues here in Montana and across the country.

Why is the federal government strangling an industry, jobs and local government revenue at a time when the country is staggering economically? It says a lot about the priorities of Washington, D.C., and its open hostility to Montana, a state that should have vast potential with its abundant coal resources. 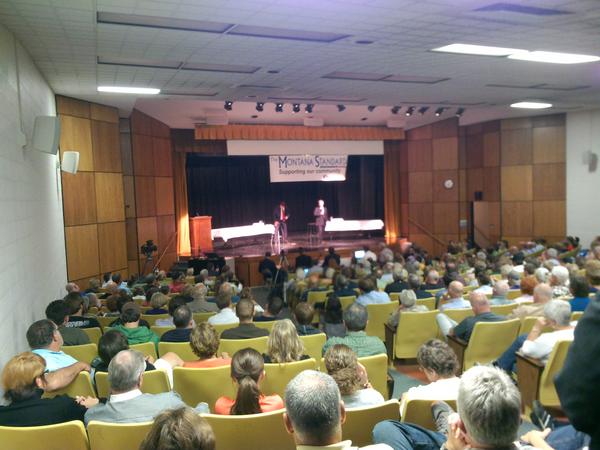