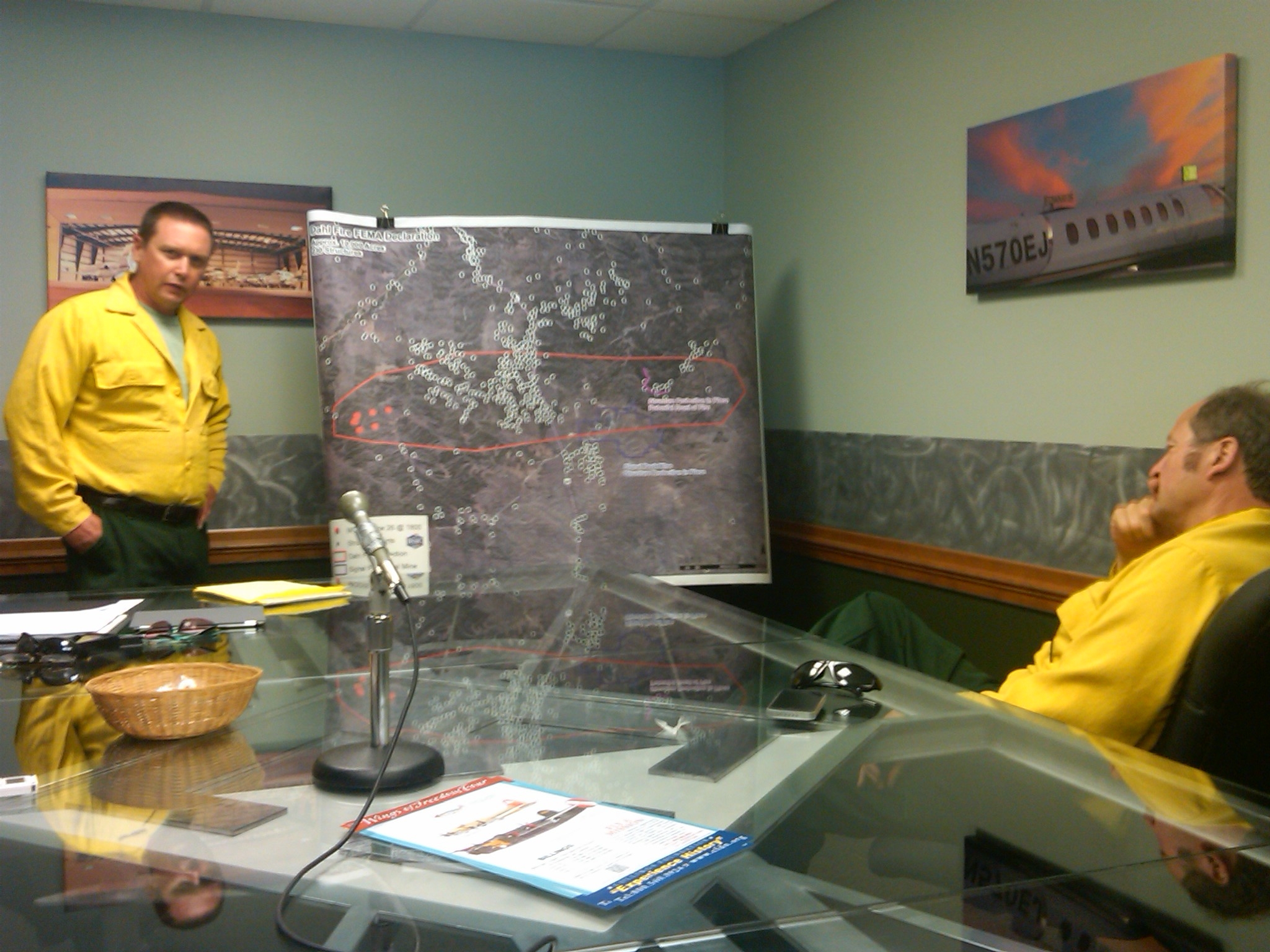 I just got back from flying over the large fires threatening central and southeastern Montana along with Gov. Brian Schweitzer (D-MT) and reporters from the AP, KTVQ-TV, The Billings Gazette, and KULR8-TV. 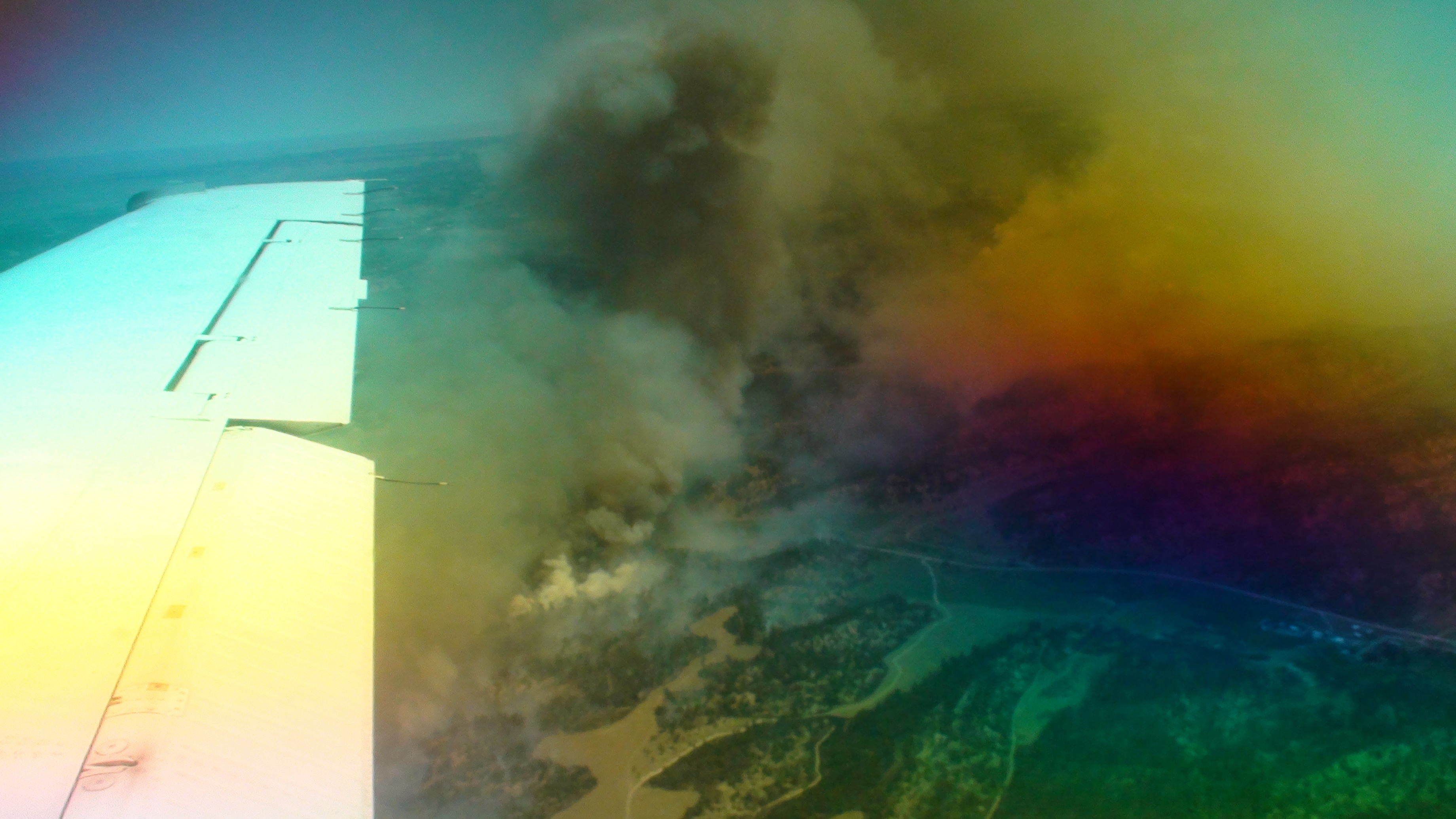 Pic: Flying over the Dahl Fire. Note- the orange/purple hue in the picture is from the tint in the window of the airplane. 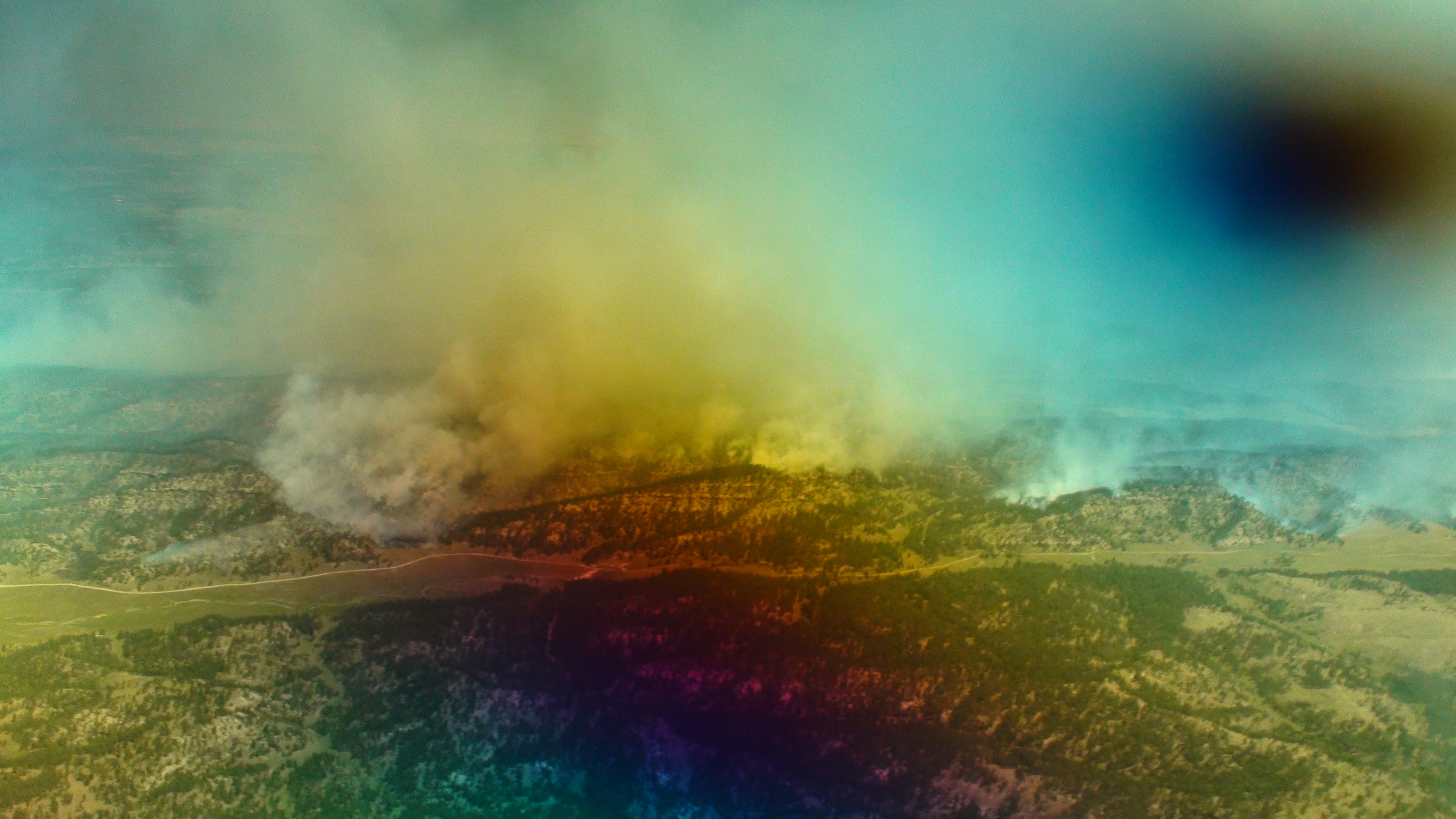 Pic: Flying over the Dahl Fire south of Roundup Wednesday afternoon.  Note- dark purple and orange hue in bottom of picture is due to window tint in the airplane.

As we flew over first the Dahl Fire South of Roundup, Montana, the Governor spoke of smoke so thick it was hard to really get an accurate count of how many homes have been lost.  The DNRC says dozens of homes have been lost, while The Billings Gazette earlier quoted the Musselshell County Attorney saying as many as 60 homes were destroyed.

Large plumes of smoke from the Dahl Fire were clearly visible from the airport in Billings.  As we reached the northern extent of the fire, the smoke seemed to roll northward like waves crashing into the Bull Mountains on both sides of the highway.  From our perch circling above in the King Air plane, it looked as if dozens of large campfires dotted the landscape.

Then, as we flew towards the Ash Creek fire that had already pushed through the Southeastern Montana town of Ashland, the Governor noted that the fire spread to 100,000 acres within a 23 hour period.  The fire is now estimated at over 110,000 acres according to the DNRC.  The entire region was covered in smoke so thick we were unable to catch a view of the extent of the flames, or damaged homes, that the Governor finally called out to the pilots, “might as well pull her up.”

Before we took off to fly over the fires, we started off with a briefing and statewide fire overview from State Forester Bob Harrington and Clive Rooney with the Montana Department of Natural Resources and Conservation (DNRC).

For the Corral Fire in Helena, the DNRC says the fire is in pretty good shape overall, but they added that they are expecting more winds.  Four homes in Helena were lost already from that fire.  I’ve been told that one of the homes belonged to a soldier currently deployed to Afghanistan.

As for the Dahl Fire burning south of Roundup, Rooney says the lightning-caused fire was first discoved around 1:00 PM Tuesday, and has since burned over 18,000 acres and destroyed dozens of homes.  Rooney noted that the fire temperature was 106 degrees Wednesday.  “We will have extreme fire growth…this fire will be here for some time,” said Rooney.

State Forester Bob Harrington says the state has requested a DC-10 air tanker to help fight the Dahl Fire.  The DC-10 carries 20,000 gallons of water, but comes at the cost of $100,000 a haul according to Gov. Schweitzer.  The Governor says the state should know within a day or so as to whether that request has been granted.

The Dahl Fire is burning very close to the Signal Peak coal mine South of Roundup.  The Governor says it looks like the mine is using their own equipment to protect themselves from the fire.

When it comes to the Ash Creek fire in Southeast Montana, Harrington said the DNRC’s fire program manager, Randy Sanders, called this fire the scariest fire he has ever seen, and Harrington says Sanders has immense experience with fires.