Phil Kerpen, vice president for policy at Americans for Prosperity and the author of the book “Democracy Denied” about the Obama administration’s regulatory agenda, calls out Sen. Max Baucus (D-MT) and his efforts to shield the Environmental Protection Agency.

In this Politico op-ed, Kerpen points out the fallacy behind Baucus’ claims that his amendment would shield farmers from new EPA regulations on carbon dioxide:

A vote for the Baucus amendment is a vote to adopt national global warming regulations of the worst kind and in the worst way: A convoluted, back-door process that hides the regulations and their costs from citizens

“The EPA plan would inevitably raise fertilizer and energy costs. Farmers and ranchers have limited ability to pass these costs on to consumers. EPA’s approach to regulating greenhouse gases has never been approved by Congress and would set in place a regulatory scheme that the EPA administrator herself has testified would have little to no impact on global climate absent an international agreement.”

Meanwhile, Rick Manning, the communications director of Americans for Limited Government, goes after Baucus’ deficit reduction claims in this op-ed piece in The Hill.  The response follows an opinion piece written by Baucus in The Helena Independent Record.

Really, Max? You are going to eliminate a $1,650,000,000,000 budget deficit by stopping erroneous tax refunds to prisoners and not giving out as many government employee credit cards?

Unless you are referring to Timothy Geithner’s credit card, with a $50 billion limit to bail out too-big-to-fail financial institutions, I don’t think that is going to get us anywhere.

When you read Max’s top 10, contrast that to House Republicans, who have buried themselves in the federal government budget, trying to find real cost savings, and bit the bullet to pass a CR that cuts $61 billion.

Senator Jon Tester (D-MT) didn’t escape the op-ed criticism this week either.  But unlike the quotes from above, this piece came from a longtime friend, supporter, and Democratic contributor who now describes himself as a “Log Cabin Republican.

In the piece titled “My Letter to a Senator Friend,” a man claiming to be a longtime Tester friend, Larry Elkin, writes from New York at PalisadeHudson.com, saying that he still plans to vote for Tester, but:

I wanted to see Democrats win a Senate majority in 2006. I do not want that result in 2012. My preference is to see you return to Washington as a member of the minority. The four years that your party held power in both houses of Congress were a period of epic policy errors, corrosive procrastination, wanton spending, and, too often, outright demonization of people like me. Your party cannot reasonably expect my support after four years of vilifying “millionaires and billionaires” (meaning anyone with even moderate financial success) for not wanting to carry a grossly disproportionate share of the country’s expenses and debts, even as you urged vast numbers of middle-income voters to expect ever-increasing government benefits, as long as they vote Democratic.

Elkin added he still opposes the GOP on many social issues.  I also found this line interesting:

I appreciated the courtesy you showed Goldman Sachs CEO Lloyd Blankfein last year at a hearing on the fallout from the financial crisis. You were the lone Democrat on your committee who did not behave like a hungry cannibal at a barbecue.

I found that quite amusing considering the below press release from Sen. Tester’s highly paid media operation, claiming he “grilled” Goldman Sachs executives.  The “grilling” was then cut and pasted into local headlines across Montana.  (May have been a different hearing, but telling nonetheless) 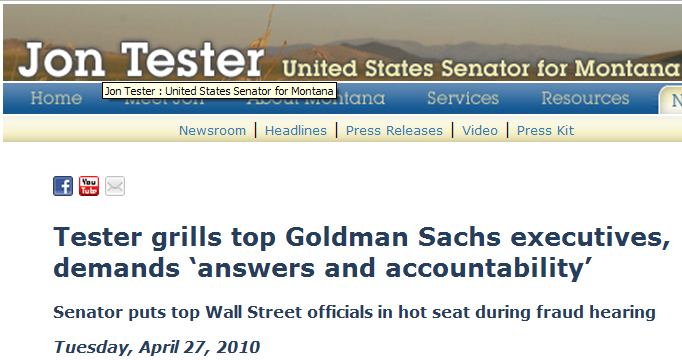